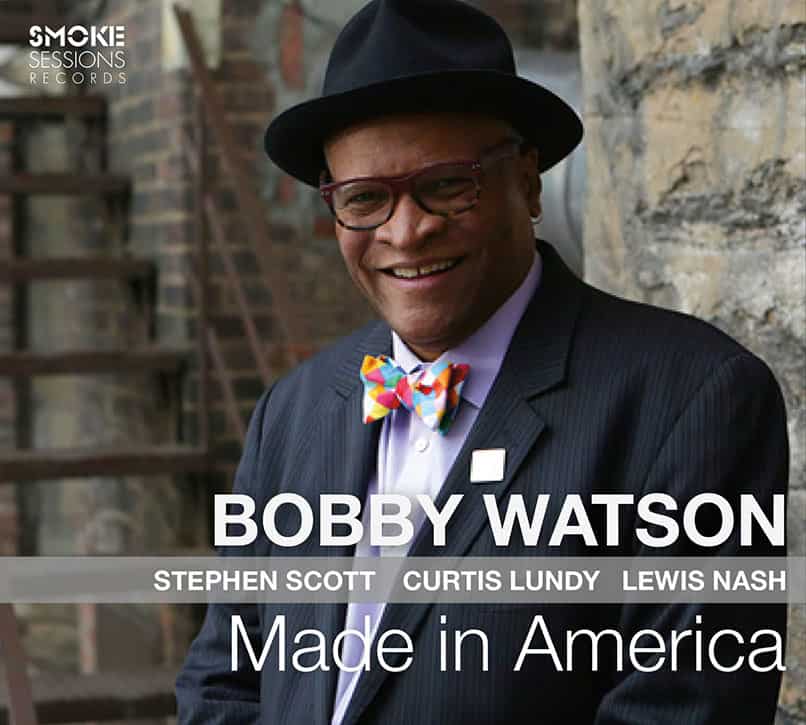 The Aviator “For Wendell Pruitt”
The Guitarist “For Grant Green”
The Butterfly “For Butterfly Mcqueen”
The Cyclist “For Major Taylor”
The G.O.A.T. “For Sammy Davis, Jr.”
The Entrepreneur “For Madam C.J. Walker”
The Jockey “For Isaac Murphy”
A Moment of Silence
The Real Lone Ranger “For Bass Reeves”
The Computer Scientist “For Dr. Mark Dean”
I’ve Gotta Be Me

JAZZ GREAT BOBBY WATSON celebrates some of the vital but less well-known contributions of African-Americans on Made in America, his first recording on Smoke Sessions Records. Saxophonist and composer Watson does his part to call attention to black pioneers in a variety of fields, from politics to pop culture, science to sports. These compositions are inspired by a few names that should be familiar to jazz fans – Sammy Davis, Jr., and Grant Green – but also by more obscure historic figures such as Wendell Pruitt, Butterfly McQueen, Major Taylor, Madam C.J. Walker, Isaac Murphy, Bass Reeves, and Dr. Mark Dean. Watson explains, “This project has been a history lesson for me and I hope it will be a history lesson for the listeners.”

Each piece paints its portrait with wit and feeling for the nuance of its subjects. The inspiration that Watson finds in these forgotten innovators comes through in his – and the band‘s – playing throughout the album. Watson‘s Kansas City roots shine through in the soulful swing and boisterous grooves that make for one hell of a funky history lesson. For this special project, Watson enlisted a few collaborators with whom he shares some significant history of his own: bassist Curtis Lundy, pianist Stephen Scott and drummer Lewis Nash. All four have tenures with the influential singer Betty Carter in common, while the album marks a welcome return to the scene for Scott, who has been largely silent for the last several years.

“This is not your typical jazz record,” Watson concludes. “I want to try, in the time I have left, to reflect the things that I‘m learning about history, about America and about the world and the people that came before me, and hopefully connect that with some of our young people and older people, both black and white.”